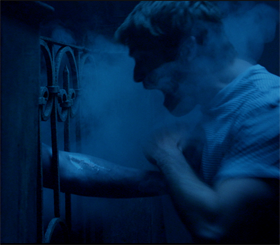 BEYOND THE GATES scoops award at Los Angeles Film Festival

BEYOND THE GATES has scooped the NIGHTFALL award at the Los Angeles Film Festival 2016. Directed by Jackson Stewart and featuring legendary genre actress Barbara Crampton ( Re-Animator, Your Next ) Beyond The Gates has been garnering great reviews.

In Beyond The Gates, two estranged brothers reunite seven months after their father’s disappearance to liquidate his anemic video store. While there, they unearth an old VCR board game that acts as an inter-dimensional hub to a nightmare world where their Father’s soul is trapped and can only be saved by rolling the dice. The film is an adventure horror in the fashion of JUMANJI that pays loving tribute to the VHS format, video stores, and board games of the era.

“A perfect balance of humor, horror and adventure…I absolutely LOVED Beyond the Gates”.
– Ashley Menzel, We Live Film

“Throwback paranormal movie in the spirit of Phantasm, and Poltergeist”
– Bloody Disgusting

“An enjoyable romp that calls back to some of the more outlandishly gruesome horror films of the 80s”
– Peter Martin, Twitch.